I’m not sure why it has taken me this long to have a post titled “This Is Duchenne”. Maybe a small part of me still held out hope that all the medical documentation and genetic testing could still be wrong. That Cade could still be misdiagnosed. Maybe he had something less fatal.

Or maybe because we have had no handbook on how to go about this new life. Maybe we didn’t know (and still don’t) what our normal now looks like. We haven’t figured out how to shift things in our life so that Duchenne doesn’t get too much attention but yet doesn’t get forgotten either.

Maybe we don’t want our friendships to change any more than they already have. Maybe we just want to be included as an equal.

But one thing I am noticing and learning is that Cade is now one of the faces of Duchenne. We now live a new life and that life is the Duchenne life.

So this is the past two days of Duchenne according to Cade.

Thursday morning he got up and went to school like a normal day. About an hour and a half after school started I received my first phone call from the school nurse. Cade had fallen in class and hit his face pretty hard. His nose was really sore but he didn’t have any cuts and wanted to go back to class so he received a Tylenol (no ibuprofen because of his heart medicines) and an ice pack and went back to class.

About 15-20 minutes later I received my second phone call from the nurse. Cade was now exhibiting the signs of a mild concussion. He has already had 2 prior concussions so we are well versed in what that means. I ask if it is bad enough that I need to come get him or if he wants to stay because of the spring program that evening. He decides to stay and the nurse will monitor him for the rest of the day.

Shortly after lunch I received my third phone call from the nurse but this time with good news. He appears to be feeling better, has ate lunch and was currently joining his classmates out at recess. The program would still be possible for him. I was really glad for that because this year he was really excited to be in the program. I don’t know why this year he was more excited than others but I didn’t ask and just went with it.

Later when he got off the bus after school he immediately wanted to get ready for the program! I convinced him to wait a bit and talked to him about his fall. I asked if he made people in his class nervous when he fell. He said he couldn’t tell because everything stopped and he didn’t hear anything. Well Cade you probably lost consciousness for a moment and you definitely have a concussion.

I went on to tell him if he would have been embarrassed I would have came and picked him up from school but I was so proud of him sticking it out. He set a great example of how to stand strong in a tough situation.

Then it was finally time to get ready for the program. He wanted to be a mime so I applied white face paint. His nose was still pretty sore but he sat well and let me get it all on. 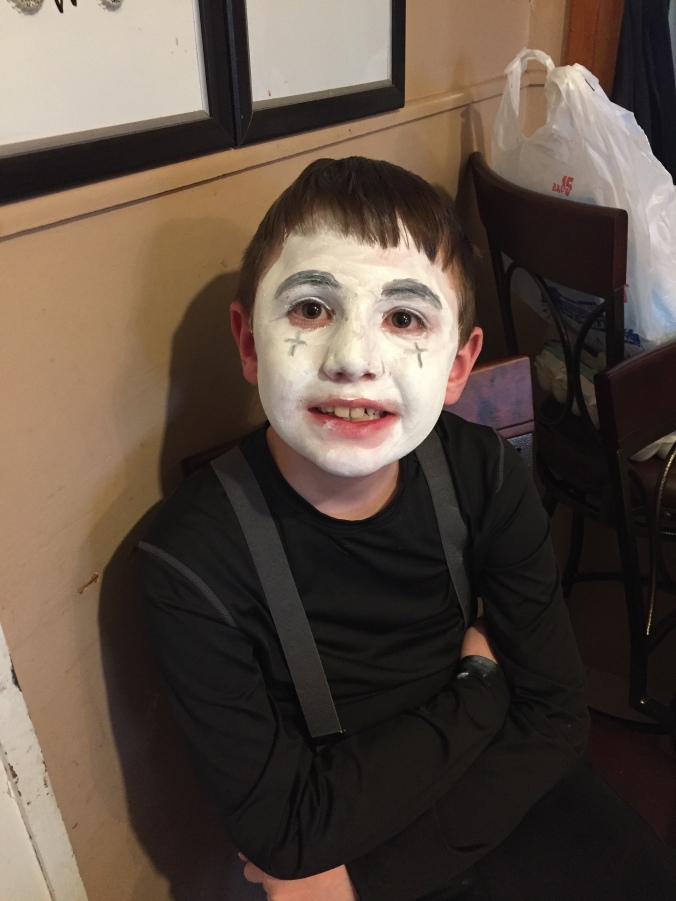 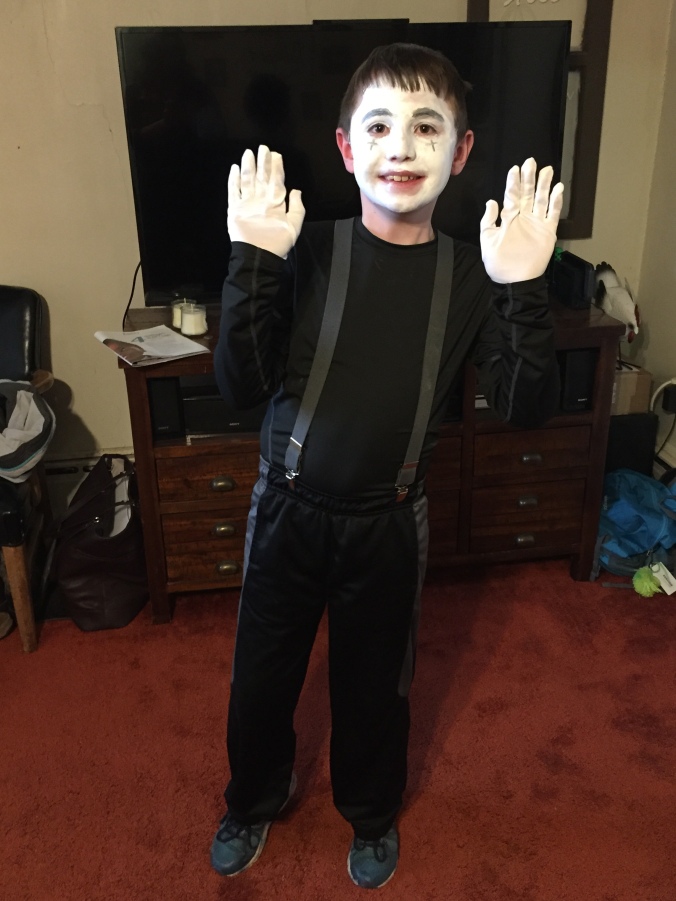 Because of Duchenne and maybe a little bit of mom’s procrastination, we seem to run a little late for things. This was no exception. It took me longer to get him ready than I thought it would but we headed towards the school. It was decided that his scooter would be left in the room where they were gathering before the start of the program. This was going to be good solution. What I had not thought ahead about was how I was going to get him to the room. I couldn’t have the wheelchair with us because then they both would not fit in my car after the program. So a piggyback ride it was.

So we were just a bit late but still doing good. Cade was quick to wave me on to my seat but I waited to make sure he found his scooter. I was also warned that I could not smile at him during the program because it makes him laugh. I broke all kinds of rules and he still survived and had a great time!

Then the worry set in for today. Today is blood draw day. He always makes it worse in his head than the actual event. But until he realizes that during the actual blood draw, we get the job of dealing with his worries. Luckily for us, after we stopped to eat after the program, it was bedtime so not too much to deal with.

Then this morning began with more worry and dread. He complained that today was the day when he was getting stabbed. I corrected that to poked but he still persisted. Then he complained that they would rob him of his blood. I explained that the amount they needed to take in order to test it was very minimal and his body would not even miss it before it was regenerated.

We are progressing some with his worry about blood draws though. There were no tears. Not before, not during and not after. I’ll take whatever win I can get. We were also so fortunate that the lab tech was amazing and made the impact on Cade minimal also. Now on to the weekend and hopefully something fun for all of us!